They say… a lot! And some of it’s true. But discerning what’s true from what’s not requires some effort, or at the very least, some healthy skepticism. In my business, miscalculations come at a cost to our valued clients, so I don’t mind spending the extra time it takes to clearly understand what the market is doing in the moment as it relates to the value of a home being purchased or sold.

Well, rumor has it that we’re heading for a recession and home prices will fall as a result. I’m sure you’ve already heard it from someone, or read it in some article or post: the sky is falling! Based upon what I’m reading from those more qualified then I, that recession does seem likely. But, it’s useful to know that, according to CoreLogic, out of the last six recessions, only two saw real estate values drop and the other four saw healthy appreciation. One falter was a mild one in 1991-1992 (1.9% drop in home values) and the other, fresh on all of our minds, was the Great Recession from 2008 – 2012 (19.7% drop). What both of those had in common that brought down real estate values was a very high inventory of available homes at the same time as rising unemployment.

With the severity of this apparently approaching recession very much in question, it’s certainly possible that unemployment could rise. But with so many strong businesses struggling to find good employees right now, it would seem that those super-slim margin companies that may have to shutter in a recession will release some ready, willing, and able employees, ripe and right for the taking. So my unqualified conclusion to this piece is that unemployment won’t suffer significantly, unless somehow this recession becomes much larger than is widely predicted. It could happen. 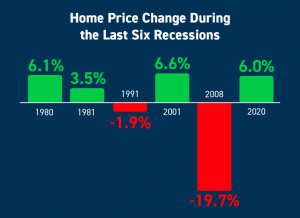 That said, the subjects which I am qualified to opine on are the trajectory of housing supply and demand, and viable options for increasing inventory. Oh, and yes, the effect on home prices that is the byproduct of that supply-demand dynamic.

Most everyone knows that we have endured the worst deficit of needed housing in anyone’s memory, or any record that I’ve seen. Hence 28% home price increases in the last two years, 13% increase already this year, and in many cases as much as 100% value increase since the end of the Great Recession. The best way to improve inventory is the construction of new homes, or, 2nd best, an exodus of current residents to anywhere else. We’re all pretty aware that the very opposite of an exodus is continuing in Colorado, in the Denver Metro, and in our beloved foothills communities, which leaves only the building of new homes, including the more affordable condos and townhomes, to solve this problem.You would think that that would make this a really good time to be a homebuilder, big or small. But “nay, nay” say those who are trying to fill the void and meet the present demand in a timely and profitable manner.

See, this little supply chain issue we’ve run into has tossed every builder’s timeline estimates right out the window. Understaffed, slow-moving city and county building departments have only exacerbated their problems, and then the rising cost of land, building materials, and labor has made those delays all the more expensive. As a result, most of the larger production builders have literally scaled back construction and ceased their presales to reassess the prices at which they can build, sell, and make a profit. They were a full 10 years behind in their ability to fill market demand, before the pandemic! There will be no overbuilding of homes, and no excess of inventory, for this recession to feed upon.

But, due to recently rising mortgage rates, new contracts on preexisting and new homes have recently fallen in comparison to the first four months of this year, and the two years prior. So the normal spring inventory lift is a little extra pronounced, and Memorial weekend saw new and back-on-the-market listings exceed new contracts for the first time in a long time. That trend appears as though it will continue through the summer, but not in a dramatic fashion based on the data trajectories that I’m seeing. So no, the sky is not falling. And  homebuyers may stand a chance of purchasing in the coming months without having to pay that 10%- plus premium most have been paying of late. Regarding these 5%+ mortgage rates, if it’s any consolation, and it should be, in the last 50 years, home purchasers have paid, on average, 7% on home mortgages. We’ve gotten pretty spoiled in the last 10 years, but now it’s time for a reality check. And hopefully, a rearrangement of priorities, both societal and personal, will heal our economy, sooner than later.

We wish you all, as always, happy homes!