K.C. Butler grew up in Indiana and moved to Colorado in 1974 as a teenager. He moved back to Indiana to finish high school and then moved back for good to the Denver area in 1977. He started his career in construction at his family’s company doing everything “from the first shovel in the ground to the last shingle on the roof,” as he puts it. He moved on to become a construction coordinator. He didn’t particularly like working for the family business, so he was looking for a change. His grandmother always told him that a salesman writes his own paycheck, and K.C. liked that idea. He had good people skills and decided to get into real estate sales. He feels comfortable to speak to the product, considering he used to build houses from scratch. 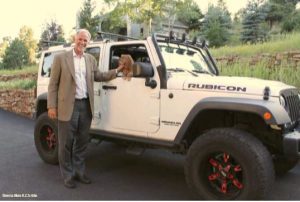 In 1983, he joined RE/MAX and has now been an Associate Broker with them for 37 years. In 1994, he started his team The “Home” Team, a name that is familiar to all of us living in this area. Together with his team, K.C. adopted Keystone Drive under the “Adopt a Highway” program and leads community volunteers for a clean-up of this road every year. This takes place on the closest Sunday to Earth Day in late May and everyone from the community is invited. The clean-up usually lasts around three to four hours and yields about four full bags of trash. Other charitable events K.C. and his team are involved with include an annual bowling event (February) and an annual poker tournament (June), both events are for his growing club of clients.

K.C. loves living in Evergreen, which he calls a “fantasy place.” He especially likes the natural beauty, the mountains, the wildlife, the fresh air, the trails, and the lake. He says, “My kids and I feel completely blessed to have grown up in a community this amazing.” However, he does miss the many bodies of water in Indiana and the water activities that go with it.

K.C. Butler has two daughters and they are both currently in college. Becca is 20 and is at the Everglades University in Daytona Beach, FL, to study Aviation. Madi is 19 and goes to Colorado Mesa in Grand Junction, CO, studying Criminal Justice. K.C. also has a dog named Sienna. His hobbies include volleyball, mountain biking, movies, and live music. He especially likes the lake concerts in the summer.

Click the links below to view full the full Hiwan Living Magazine Article: