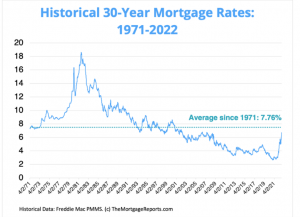 Terrible interest rates? I think this graphic tells it all. Still, I intend to now write a bunch of stuff about it.

Since I became a real estate professional almost 40 years ago, I’ve seen some things. Things like things changed by market cycles and the things that affected those cycles, from energy (oil crisis) to technology (Dot.com Bust), to greed and fraud (Savings and Loan Crisis), to terrorism (9-11) to mortgage fraud and Wall Street’s reckless greed (The Great Recession).  In fact, I started my career in one of the worst market cycles since the Great Depression. It was 1983 and interest rates had just declined to 13%, from a high of around 18%. And guess what, people were buying houses! And I was there to sell them.

Well, the 80s saw slow, gradual improvement. I survived the 80s. Better than some of my favorite rock bands did. The 90s saw steady, more rapid improvement. I thrived. And, after Y2K failed to crash every computer in the world, a weak Fed policy created chinks in our economic armor that terrorist Osama Bin Laden flew 4 jetliners through, tanking the economy momentarily. But good old American spirit lifted us right back up, just long enough to realize that even more chinks were forming. Those, along with (fantastic, 6% mortgage rates!) a little drunken optimism, and a lot of mortgage fraud, brought us to The Great Recession, where home values across the country fell, on average, nearly 30% and unemployment soared. I did not thrive, but I fed the wolves, and helped a lot of clients avoid foreclosure. But sadly, not all of them.

Lower and lower interest rates, and a LOT of bail-out money, saved the housing market and recovered the economy in 2012! BUT, the feckless Fed and three white house administrations, one Republican and two Democrat, so enjoyed boasting about the improving economy that that they failed to look much past their own noses at the Piper they knew we would inevitably have to pay. When the pandemic hit quite unexpectedly, and trillions of dollars were thrown to the masses, an unforeseen (should have been foreseen!) consequence forced the hand of that interest rate Piper to finally collect and to collect hard and fast! Welcome to the brink of the next recession (we aren’t quite there yet I think), but not a bad one, and not a long one when it does occur, by all indicators.

The moral of this strange, obscure-reference-laden story is that while we’ve been spoiled for over 10 years by historically low interest rates, we’ll just have to settle for average interest rates for now. Home prices will sink some and will begin their rebound when the calendar strikes 2024, or very, very soon thereafter. That is, unless the Fed and the current government ignore all prudent fiscal practices and run us right over the cliff. At that point we’ll probably all need to start learning a foreign language, says my very cynical alter-ego, whom you will never meet in person. And—The “Home” Team will persevere!